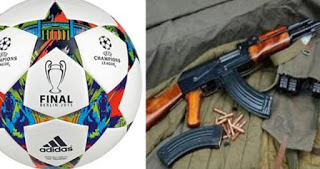 Some robbers had a filled day on Tuesday, April 16 as they took their trouble to steal about three police weapons, bullets among other things after “all the officers left the station to watch UEFA football match”.

A Kenya police report has revealed that its Kobujoi station was broken into by yet-to-be identified robbers at night, taking advantage of the absence of the officers on duty who had vacated the station to watch football at a nearby shopping center.

Reports say the Nandi county police command has launched an investigation into the matter to fish out the perpetrators.

According to tuko.co.ke, when the football loving police officer returned to the station around 1 a.m., they realised that the armoury room was burgled and three rifles and 20 rounds of ammunition wrapped in a magazine were missing, but two other magazines with 17 and 20 rounds were left intact.

“All the officers left the station and went to watch UEFA football match at a nearby trading centre and on returning to the post, they noticed the room of the officer in charge which is also used as an armoury in which the steel box is kept was broken and three rifles and 20 rounds of ammunition missing,” a police OB report.

Investigators from the Nandi South police division have reportedly visited the crime scene and investigations are currently underway to apprehend the criminals.

Meanwhile, it is not clear if the police officers who abandoned their duty to watch football, leading to the burglary are
liable for any sanction or being treated as possible suspects.