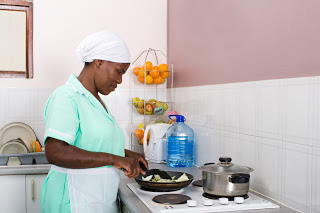 Ghanaian house girls are normally brought from the rural areas to the cities to stay with rich or average families.

Their parents give them away because they feel it’s an opportunity to have one less mouth to feed in the house. They are also told the kids will be sent to school and given proper care which is normally not the case.
Below are 10 things house helps go through which we believe are just not right.

It’s sad but these girls who sometimes are quite young are made to stay home and cook, wash and clean while the children of the bosses, go to school. This is even contrary to what their parents are told before they are brought to the city. Those who get the opportunity to go to school are also sent to public schools and even then, they are not regular, are mostly late and have to juggle between school, cooking, washing and cleaning which doesn’t help with their education. Ultimately, they stop.

2. Eats after everybody has eaten.

They do the cooking but mostly can’t eat until everyone has eaten to their fullest. Sometimes they eat leftovers if there’s not enough for them. When they are also served, it’s so little they have no option than to rely on the leftovers.

5. Made to walk over long distances on errands.

Unless they are going to a very far place, they are made to walk on practically all errands. Even to places where they can get a cab or even trotro, if it’s not far in the estimation of the master or madam, they are not given transport money. They can be seen carrying heavy loads on their walks and walking to the house when they could have grabbed a cab.

That’s an anthem for them. The insults can extend to their mother’s and other family members. They are normally reminded of their poor background and how being there has given them an opportunity to get food to eat, else they would have been starving in the village. Even children of their bosses go on this tangent when they want something done irrespective of the age difference.

This is quite sad and sickening. These girls are normally teenagers and below the legal age but do these men care? House helps are constantly molested sexually by their masters. They get their breasts and behinds squeezed by these men on the regular before it extends to full-blown intercourse. They are blackmailed with the warning that they’ll be sent back to the village if they refuse. In exchange, the masters give them extra money which they also send back home.

8. Number one suspect if anything goes missing.

She’s the stranger in the house so obviously when something goes missing, she becomes the number one suspect. The other thing is that their bosses just will not want to accuse their kids so they accuse the house help rather. Even when that particular item is found later, the house help is not given any apology. They might even be given a new accusation of returning the thing after being beaten.

9. Made to wear torn/oversize/outmoded clothes.

When you enter any home with a house girl, it’s very easy to differentiate them from the kids of their bosses. They normally wear worn out, torn, oversize or outmoded clothes which make them look very shabby. They are not regularly bought new clothes and when they also use the little money they are given to buy new clothes, these are normally seized and destroyed by their hostess.