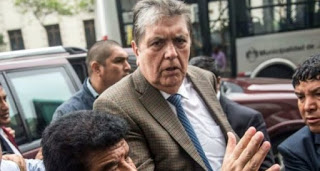 Former Peruvian President Alan García has died after shooting himself as police arrived at his home to arrest him over bribery allegations.
Mr García was rushed to hospital in the capital, Lima. His death was confirmed by current President Martín Vizcarra.

A crowd of supporters gathered outside the hospital and were held back by a line of police.
Mr García was accused of taking bribes from Brazilian construction company Odebrecht – claims he denied.
Officers had been sent to arrest him in connection with the allegations.
Interior Minister Carlos Morán told reporters that when police arrived, Mr García asked to make a phone call and went into a room and closed the door.
Minutes later, a shot rang out, Mr Morán said. Police forced the door open and found Mr García sitting on a chair with a bullet wound to his head. 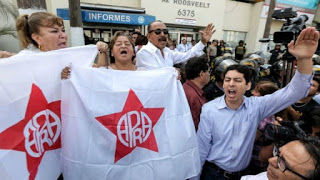 Mr García underwent emergency surgery in the Casimiro Ulloa hospital in Lima, but to no avail.
In a post on Twitter, Mr Vizcarra said he was “shocked” by the former president’s death and sent his condolences to his family.
Mr García served as president from 1985 to 1990 and again from 2006 to 2011.

Supporters of Mr García gathered outside the hospital in Lima

captionThere was shock and grief as news of his death was released
Investigators say he took bribes from Odebrecht during his second term in office, linked to a metro line building project in the capital.
Odebrecht has admitted paying almost $30m (£23m) in bribes in Peru since 2004.

But Mr García maintained he was the victim of political persecution, writing in a tweet on Tuesday that there was “no clue or evidence” against him. 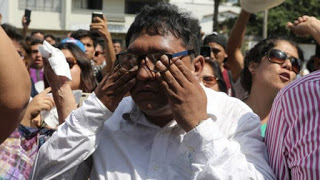 Alan García – ‘Latin America’s Kennedy’
Image copyrightAFP
Born on 23 May 1949 in Lima
Studied law and sociology
Elected to Peru’s Chamber of Deputies for the Aprista Party of Peru (APRA)
Became Peru’s youngest ever president in 1985 at the age of 36
A gifted orator, he was described by some as “Latin America’s Kennedy”
Served two terms as president, first from 1986-1990, then from 2006-2011
Investigated for alleged corruption as part of the Odebrecht scandal
SHARE: