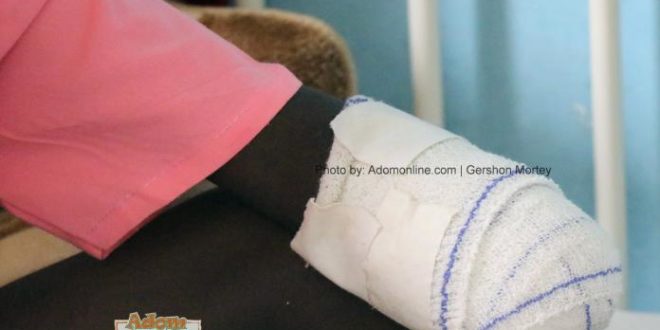 The stepmother who cut the hand of the 5-year-old boy in the Western Region has been fined 85 penalty unit or in default serve 18 months in jail.

Efua Abeduwa pleaded guilty to the charge of causing harm to the boy at the Abura Dunkwa District Court.

The court presided over by Justice Anthony Tabiri Abebrese says he took into consideration the condition of the stepmother [she’s pregnant] and the fact that she pleaded guilty to the charge.

Second accused, David Mensah, the biological father of the boy, pleaded not guilty to the charge of abetment to the crime and has been remanded to prison custody to reappear on the 28th Of February, 2019 where a full trial will begin.

Third accused, Isaac Eduful, who treated the boy at his facility when the boy’s hand was almost decomposing, was also hauled before the court.

The Prosecutors amended the earlier charge to include Mr Eduful since they believe he played a part in the boy’s current predicament.

He pleaded guilty to the charge of abetment but with an explanation. The court rejected his explanation that he had compassion on the boy and wanted to do something to help him.

He told the court, the boy was brought to him on the 21st of January, 2019 and even though, he did not have any license he had compassion on the boy and decided to treat him.

Below is what transpired between him and the judge:

Anthony Tabiri Abebrebrese: You are not a professional doctor, why did you do that?

Third accused: My Lord, I had compassion on the boy.

Anthony Tabiri Abebrese: do you have a license?

Third accused: I only have a certificate with the Ghana Homeopathy Medical Association (he presents the certificate to the judge)

Anthony Tabiri: I don’t think this can convince me (Judge orders the certificate to be destroyed).

Anthony Tabiri Abebrese: why did you not refer the boy to a bigger facility then?

The court fined him 50 penalty units, equivalent to GHC 600 or in default serve 12 months in jail.

Curious residents who filled the court today expressed their disappointment at the punishment meted out to the stepmother after the court’s decision was announced.

Some of them who spoke to Multimedia Journalist, Richard Kojo Nyarko, said the punishment to the stepmother was too light, considering the permanent damage caused to the boy.

Meanwhile, the 5-year-old boy, according to the police, is responding to treatment at the Cape Coast Teaching Hospital.